Manual     BASIC Reference manual, and Notice.
Setting    Setting mode.
SoftKey    Select keyboard mode.
KeyAssign   Setup of assignment of a key.
Multi-Tab   It can edit in selecting from max five editor.
(In Android2.x, it's ok too, tap the above title bar)
SQL Mode   Basic-SQL mode change.
Undo         To return to the state of one step before in edit.
Input-line,Delete-line,new,load,renum,delete,replace. It work after this instruction.
Permission  (Android6.0 and more)
'Permission-dialog' required for various device access is displayed.
Ex command for device will be available after choosing permission on terminal.
BT_Signal  In Bluetooth communication,
self-terminal discovery signal is taken out as a Server.
Variable-table  The list of Variables & Value in the time is displayed in the dialog.
(except for array) (Value is always changed during execution)
It can select and can input a value.(Local variable is Impossible)
Local variable is attached 'L' mark at right side.
Direct Mode / Text Box
To switch input editor type whether Direct-Console or TextBox.
Direct Mode
It is possible Line-input and Direct-command.
Only source with line-number is treated.
If load the source without line-number, line-number is assigned automatically.
By save"",n ('n' switch), it is possible no line-number save. (Mutual conversion possible)
Text Box
Line-number, No-line-number, Mixture, it's possible to treat all type sources.
It can also 'goto' 'gosub' jump by using label.
After execution, to return to editor by menu or back key.
'Search','Replace' is added to the menu. (case search-next: please press side volume+ key)
If current source is Line-number type or Mixture, it can't be switched to 'Direct Mode'.
After moving a cursor to the text head, and input 'new[enter]', and run.

One touch execution.
Run ,c     Intermediate code compile execution.
Run ,i     Interpreter execution.
Edit.      An edit part is chosen from function and label.
Load       Load program. It can select from extension'.bas','.sql' in current folder.
Save       Save program. If extension is omitted, '.bas' is attached.
Stop       The program under execution is stopped.(When key hidden)
To be also able to stop by 'Back-key' of during execution.

Font size:
Select the font size.(16,24,32,40,48,64)
Language:
The language setting of the manual.
Locate mode:
The sequence x,y and the starting point of text coordinate is specified.(x,y|0,0/y,x|1,1)
Input mode:
Softkey 'Repeat ON/OFF','Flick input',and 'Auxiliary input' be chosen.
The repeat function may not work properly depending on the model.
File operation lock:
The File operation command(copy,kill,name,mkdir) can be prohibit entirely.(ON-prohibit/OFF)
Device access lock:
The access of Device(Camera,GPS,Mic,Load"http:") can be prohibit entirely.(ON-prohibit/OFF)
Key Click SE:
The existence of sound(Soft-key typing sound,Error-beep) is set up.
And to put "keytype.wav" and "ab_beep.wav" in the current folder,
it's possible to use the Keytype-tone and Beep-tone of self made.
Since there are files "keytype0.wav" and "ab_beep0.wav" as sample, to be able to try this by erasing 0.
Print Using:
Select Format-control-string type in 'Print Using' command.
[DollarStyle] or [YenStyle].
Key skin color:
The color of software keyboard is chosen.
If the picture of "keyskin.jpg" is put into current folder and 'WP' is chosen,
the picture can be used as a key skin.
Moreover, "keyskinh.jpg" can also be separately used for horizontal screens.
Strage location.
The position of Current folder can be changed to either 'Internal storage' or 'SD card'.
When SD card is selected, and there is no SD card, it is automatically set to 'Internal'.
GLine Antialias.
OFF Graphics are drawn speedy without anti-aliasing.
Not used other than the specified color code.
ON  Graphics are drawn by 'Jaggies mitigation' and 'Smooth outline' against background color.
ColorSet(16) Compatible.
In col(x)-function.
To set which [old-machine-color-compatible] to adapt to.
The default'AB' is the mathematical arrangement based on binary number.
Status bar.
To select about Title & Status bar at the top of screen, whether to display or hide.
(At 'Hidden', not be displayed debug-line of 'tron')
Back-key became substitute for Menu-key in Status bar hidden mode.(Android3.0 or more)
It's necessary to restart App to make this setting effective.

Application is ended by Back-button+Dialog[OK].
Home-button, it will be in the evacuation state.
At the time of App-End or Go External-Application,
The current Tab's program is saved in the file"ab_backup.bas"(CurrentFolder), automatically.

When it is AB-softkey, the range of edit area is switched to its own exclusive use size.
The exclusive use edit size is held also at the run-time.
It can change in 'console' statement.
If interrupted by 'Stop' key in run, key-state that has been selected at 'run'start will be restored.
The selective key-state is stored at app end, and the last key-state will be restored at startup.

The Flick input chooses a key by Flick, and the character is inputted when it release.
Press and hold for 0.3 seconds, the character displayed on the key upper part
(Alt combination character) will be inputted automatically.

In Auxiliary-input mode, the commands according to characters which
be inputted at the head will be displayed on the right side by listing.
(The next commands can display further by '\/'.)
The chosen from them is inputted into the editor.
And, the Pop-up help for every command can be displayed by touching right side of the frame.

This editor, the commands are displayed by Color coding.
The function 'Flick/Auxiliary input' is inherited.
It is input mode based on string insertion, [ins] is locked.(PC editor like)
Lock isn't released even if pushed [ins/bs] key. Release is [alt]+[ins/bs].
Flick scrolling by left edge touch is abolished.
If push [ins/bs] at left edge cursor, a blank line is inserted.
And middle line number is displayed automatically.
If the line of middle number(One digit is fraction:not 0) is inputted,
(e.g. Between 320 and 330, '325 print' etc.)
'renum 100,,10' is executed automatically, and editor display is updated.
To be able to move the cursor for the cross direction at the upper half screen touch.
In 'Insert Editor light', the whole drawing amount is reduced for high resolution models.
As apparent differences, the touch pop of characters of flick input is not displayed.
Notes reference feature.
To put the memo (want to reference) into the file "ab_memo.txt" then,
able to refer to the memo by left flick (direct mode editor).

Models with hardware keyboard, External bluetooth keyboard,
their placement of symbol is different messy.
First must be set key by 'KeyAssign'.

Usage:
Characters is displayed on a panel.
Please touch a character to set up.
And please press the key to assign.

The input setting that it used together with the lock of the 'Shift or Alt' key is possible.
As combination method,
not 'press simultaneously with these' but 'press character key after these'.
The 'Stop-key' is assigned to the 'search key' from the beginning.

Buttons
Default    It returns to the initial state at the time of shipment.
It's used for reset when set wrong assign.
Save    The state of a key is saved. It is loaded at a start-up.
Close    KeyAssign mode is ended.

Setting by AB-exclusive soft key also became possible.
In the case of the AB-key, Alt will be locked beforehand,
key setup of Alt combined use can be performed.
Moreover, the assignment to the key of control relationship(Alt,Enter,etc) isn't possible.
The assigned data is saved independently with
(Hard-key,System-key,AB-exclusive-Vertical,AB-exclusive-horizontal), respectively.

The text editor phase(Above soft-key) is divided into some area which can be operated by touch.

Right side region:
Furthermore, it is perpendicularly divided into four.

Top: List-Page up.
Center-Upper: List-Roll up.
Center-Lower: List-Roll down.
Bottom: List-Page down.
If touched Page up/down in normal mode, to enter the Editing mode automatically.
-When using Hard-key in edit mode, it can page up-down by 'Shift+Cursor up-down'.

Left side region:
It is possible to make scrolling the List by up&down flick.
(It only work at the 'Repeat ON/OFF' input mode)

Center plane: By the difference in the input mode, there are two operation modes.

-Type A: in 'Repeat ON/OFF'input mode.
A cursor moves to the position touched directly.
Moreover, if four directions around a cursor are touched, it will move in the direction.
By flick to left/right direction, a cursor can be moved to left/right edge. 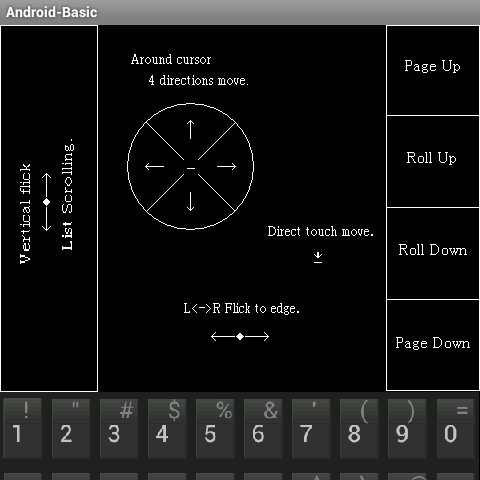 -Type B: in 'Flick/Auxiliary/InsertEditor' input mode.
The screen, by the style divided in the cross direction.
It's assigned to cursor movement(top,bottom,left,right) respectively.
To keep pressing, repetition cursor movement ok. 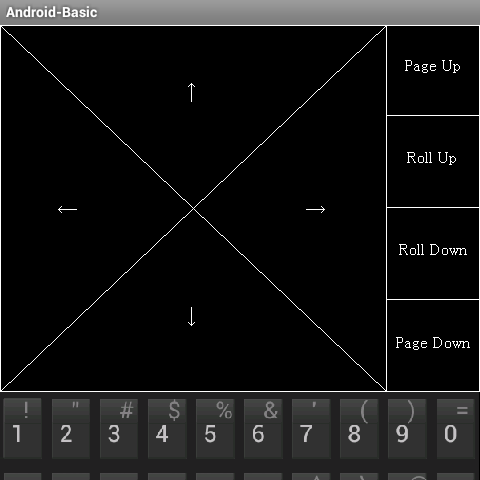 - Copy (Fn-Fn)
Cursor is united with the head of the string to copy, and press 'Fn key'.
And cursor is moved to the tail end of the string and 'Fn key' is pressed again,
the string will be copied.
It can copy from two or more characters.

- Paste (Fn+space)
Cursor is moved to attachment(insertion) place, and press 'Fn key',
and next 'space key' is pressed, the string of clipboard will be pasted.
It also support to 'copy & paste' of the program including line feed code.
After paste, it is stored as program by pushing 'enter'key in each line.

- Delete the back of line (Fn+stop/cls)
It can delete (cursor-end of line) string.
Move the cursor to the specified position, and
in the state that 'Fn key' was pressed, then press 'stop(cls)'key.

- Split line (Fn+enter)
Move the cursor to the split position, and
in the state that 'Fn key' was pressed, then press 'enter'key.
The original line is decided by it.
New line is decided as a new line by inserting line number and pressing the Enter key.

- Insert line (Fn+bs/ins)
In the state that 'Fn key' was pressed, then press 'bs(ins)' key.
To insert a blank line.

- Line position Pinning (Fn-Fn)
It is same key operation as 'copy', but
by pressing Fn-key twice without moving the cursor,
the line is memorized as 'Line position Pinning'.
If moving to another area, by select [Menu>Edit>Pin(Label list)],
it can return to 'Pinning line position'.

The 'Fn key' in the hardware keyboard is assigned to the 'Right shift key'.
Depending on the model, there are thing that 'Fn' is stamped to 'Alt key'.
(Really, it is 'Alt key')
If models don't have 'Right shift key', please assign to any key by 'KeyAssign'.

Android4.4 models usually cannot access the SDcard unless rooted.
Some Android5.0 or later models with SDcard path type of UUID(xxxx-xxxx), it cannot access SDcard.
These can access SDcard now as Current folder by the next operation.
To create 'and.bas' folder under the following folder with FileExplorer App.
For Android4.4 models:  /sdcard/Android/data/
For Android5.0 or later models:  /storage/xxxx-xxxx/Android/data/
After creating folder, and start Basic app, (load,save)access become possible at its location.

There are several ways in addition to replacing the SDcard.
Connect Android and PC with a USB cord,
chose the item of SDcard(storage) from setup of Android,
and tap [Turn on USB storage.]
After a while, it is connected and Explorer comes out in PC side,
then exchange files by it.
If operation is over, turn it off and cut connection.

The text-box for memo can be opened by left Flick while editing.
This can be used memo writing of the free contents.
'Back button' is pressed to return to programming editor.
The contents is automatically saved in current folder "ab_memo.txt" at the end of app.
If put the text to want to reference into "ab_memo.txt" in advance,
it is loaded in the app starts, and
it'll be possible to refer to immediately.

In the case of direct mode, press space key after alt key in editor.
UI text box will appear, tap it and enter the particular characters in system's keyboard.
It will be inputted into an editor if OK is finally pushed.
This input mode of operation can be performed as well by pressing the key you assigned a key 'Uni'.

Hardware controllers are usable in addition to Virtual-device on the screen.
Bluetooth controller (beforehand, it is necessary to carry out pairing.
by Machine-Setting>Bluetooth ON>Scan )
And also NVIDIA-Shield, Xperia-Play controller are usable.
Acquire: 8way(STICK-function), 2buttons(STRIG-function)
Button's 'assign code & carved seal' of each controller may be different.
*Caution:There is also something to which a key code of 'stop' is assigned in the button.
Assign by Hardware-keyboard: [arrow-key:direction X:A-button Y:B-button]
Please refer to general information for pairing method of Bluetooth devices and Android.